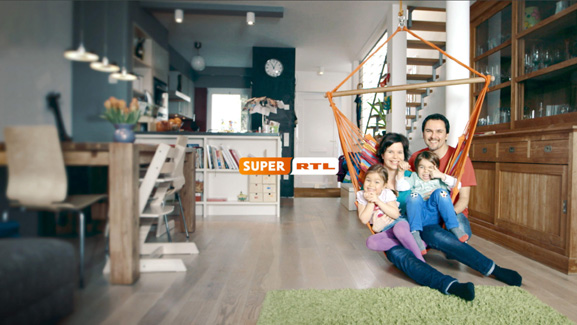 SUPER RTL recently premiered its new on-air design motifs to emphasize its positioning as a channel for children and families. The redesign is also meant to create an authentic look for the brand that both children and parents can identify with. To this end, SUPER RTL did not work with models but real families in their actual living environment, resulting in imagery that feels more authentic and closer to the target group. During daytime, ten new bumpers and station IDs are shown which transport the fun and energy of the children's entertainment brand TOGGO. In the evening, adults are integrated into the motifs to send a clear signal to the parents, who often sit together with their children watching television during this time. Stefan Mays, Head of On-Air Communication at SUPER RTL: "Right now, SUPER RTL is the only one visualising the topic family in this way. We believe we provide a clear USP in this competitive market and increase the acceptance of the relevant target group." The project was implemented in cooperation with the Cologne-based design agency FEEDMEE. 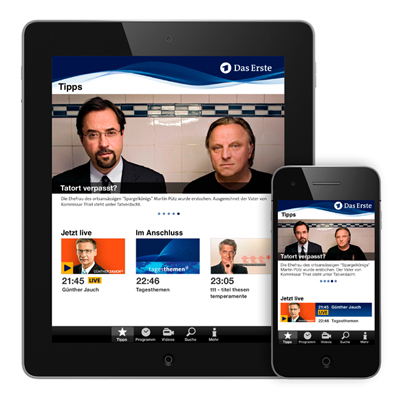 Das Erste recently released an App to give users easy and direct access to videos, live stream and programme guides. In addition to series, the app also provides access to talk shows, documentaries and movies. These can be watched both live as well as time-delayed. Additional features such as programme reminders are available. "Starting with the live stream earlier this year, Das Erste began making its programming available to the audience via all broadcast channels and mobile", says Volker Herres, Programme Director of Erstes Deutsches Fernsehen. "The app is designed to give online users more comfortable access to current programmes and to the Das Erste Mediathek", adds Herres. The free app is available in the Apple App Store and Google Play Store. 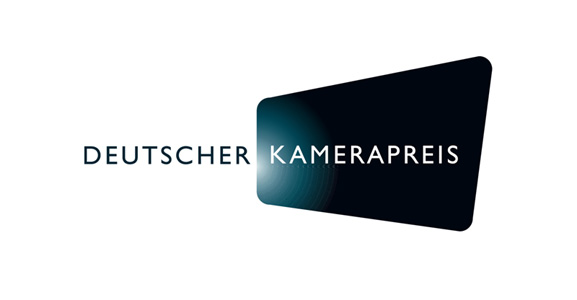 On 22 June 2013, the Deutsche Kamerapreis will award the Internet award 'kamera3030' for the second time. This year's theme is "Dreierbeziehungen". Video clips and short films lasting anywhere from 30 seconds to 3 minutes will be honoured for their innovative camera work and editing. Entries can be uploaded on www.kamera3030.de until 30 March 2013. The conditions of participation can be found there as well. Online voting will be carried out between 3 and 30 April 2013 to determine the Top 30. The Deutsche Kamerapreis will then choose 3 finalists as well as the winner. On 22 June 2013, the winner will be honoured during a festive gala in Cologne.

Peter Limbourg (52) is set to become the new director of Deutsche Welle. The current Director of Information at ProSiebenSat.1 TV Deutschland was chosen to succeed Erik Bettermann (68). Bettermann's term of office ends on 30 September 2013. He has headed the German international broadcaster since 2001 and has shaped its realignment during that time.

Until 12 May 2013, the exhibition 'PIXAR – 25 Years of Animation' can be seen at Museum für Kunst und Gewerbe Hamburg. More than 500 pictures, drawings, paper works, maquettes, film sequences, documentary reports and features from the California-based PIXAR studios are being presented for the first time ever in Germany. In 1986, PIXAR started by producing shorts and advertising films. In 1995, the company revolutionised the genre of animated cartoons with 'Toy Story' – the first completely computer animated film. Since then, more than 40 million viewers in Germany have seen the twelve PIXAR productions. The exhibition offers visitors an exclusive look behind the scenes, because the company's production facilities are not open to the public. 'Pixar – 25 Years of Animation', until 12 May 2013 at Museum für Kunst und Gewerbe Hamburg, Steintorplatz, D-20099 Hamburg. Opening hours: Tuesday, Wednesday and Friday to Sunday from 10 a.m. to 6 p.m., Thursdays from 10 a.m. to 9 p.m., closed on Mondays. Further information at http://www.mkg-hamburg.de/de/ausstellungen/aktuell/pixar-25-years-of-animation.html

What are the goals of visualisations? How can the creative-professional handling of information be approached? And what data are valuable enough to be processed creatively? These and other questions are discussed in the recent publication "Information Graphics" by Sandra Rendgen. In the digital age, there is an almost inconceivably large flood of information that needs to be selected, understood and interpreted. Given the complexity and richness of the data, it is often easiest to communicate it visually. This book presents a comprehensive view of the topic. 200 projects with over 400 sample images from around the world are presented. The works come from various areas such as journalism, art, politics, education, research and business. In addition, three essays by Paolo Ciuccarelli, Simon Rogers and Richard Saul Wurman examine the development of information graphics from its beginnings to today. The book includes German, English and French texts. The 480-page publication is published by the TASCHEN publishing house and can be purchased for 49.99 Euros.