"Welcome home" is the new RTL slogan and the title of the new RTL umbrella brand campaign.

The new campaign, which will run until the end of the year, was developed and designed by RTL CREATION. The campaign is divided into five phases which can be seen on air, off air and online.

The whole campaign will be accompanied by the title song 'Welcome home' from the young Belgian artist Yannick Bovy.

"In times of an increasingly fragmented market, it is important to us, to not only talk about our programme brands, but increasingly also about our channel brand and to not leave the "interpretative authority" to third parties," says Björn Klimek, Creative Director RTL CREATION and largely responsible for the new campaign. "We talk about the strengths of TV in general – and of RTL in particular: We show campfire moments that can only be created by television, as well as great emotions and characters which the audience can trust and which create brand loyalty. At the same time we invite our audience to a rather unusual look behind the cameras and bring them closer to the channel and the brand RTL.".

"So sieht's aus" – a new look for kabel eins

Since 31 August 2015, kabel eins presents itself in a new design with the slogan "So sieht's aus".

The new core elements of the facelift are an edgier logo, skewed pack shots, a new font and for the first time a separate testimonial, who ansers to the name Kabel Heinz: The new channel face appears on air as the central figure in many design areas – in advertising openers, signations and trailers. In addition, Kabel Heinz shortens the time between the programmes with cool sayings and surprising actions. You can get to know the guy at www.kabel-heinz.tv.

Station Manager Katja Hofem: "Welcome to the orange world of kabel eins! Of course, we are sticking to our signal colour and now stage it in an even more concise way. The 1 remains in the logo and distinguishes itself even more than before. The redesign gives our channel appearance a fresh, modern push and underlines the linear, no frills approach of the channel. In particular, I am pleased that we are giving a distinctive touch to our channel with our striking testimonial. Welcome, Kabel Heinz!"

At the same time also kabeleins.de launched with a new look. At the beginning of July, off air ads had already been published with the facelift.
Watch the clip of the kabel eins redesign at https://vimeo.com/137467349

On September 22, 2015, sixx brings one of the most famous reality shows back to German television and promotes the new season with the biggest programme campaign since channel launch. The promotion runs through all channels of ProSiebenSat.1 TV Deutschland and will be on TV, online, on the radio, off air in print and out of home as well as social media channels.

"You will look." At the center of the campaign is a real eye-catcher, the "Talking Eye", the eye of the big brother that misses nothing. On air it is already pulsating in the first teaser with the voice of "Big Brother". The huge green iris is also watching the viewers from print ads. The programme logo is modeled on the "Drop" of the sixx visual.

"You will love it." The on air campaign with one master spot, six trailers and over 20 short elements describe the versatile experience of "Big Brother" and ironically plays with issues typical for the programme. We see people who are drawn in by "Big Brother".

"You will see everything." After the first call trailers on sixx, on the radio and online, the main phase has been running since September 1 to increase interest in "Big Brother": on six and in the cross promotion on all sister channels. The off air campaign will be launched nationwide on September 15 with large citylight designs and advertisements in Glamour, InStyle, InTouch, TV 14, TV Digital, TV Direkt, BILD and B.Z.. The broad-based online Ramp-Up with its own website www.big-brother.de, optimised for mobile devices, teasers and InStream promotion on MyVideo, Studio 71 and other digital ProSiebenSat.1 platforms and placements in social media networks (#BBsixx) complement the extensive campaign. 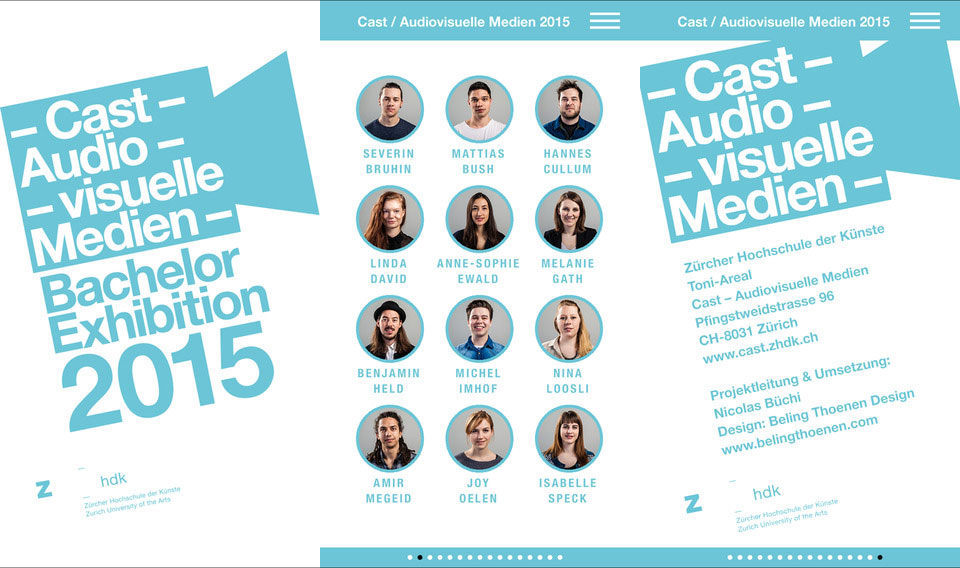 You missed the diploma exhibition 2015 at the ZHdK – Zurich University of the Arts? No problem – Nicholas Buechi, assistant of the study course CAST/Audiovisual Media has developed an exhibition app under the direction of Prof. Dr. Martin Zimper, where all of this year's theses can be viewed.

Clear and with a visually high-quality design, the app displays the audiovisual projects and provides additional information on the works and creators.

"Short stories for shared screens" is what CAST students learn to produce. They tell stories for the many screens and devices that accompany and surround us daily: smartphones, tablets, GPS devices, public screens on trams and, more recently, virtual reality glasses like Oculus Rift. The students tell their stories in moving images, photos, animations, with sound and interactivity. CAST graduates are creative generalists in a new media age.

The app trailer can be seen at https://www.youtube.com/watch?v=B2iMFwxh3No

The CAST app 2015 can be downloaded for free for iPhone https://itunes.apple.com/ch/app/zhdk-cast/id880642849?mt=8 and Android https://play.google.com/store/apps/details?id=air.ch.zhdk.cast&hl=de. 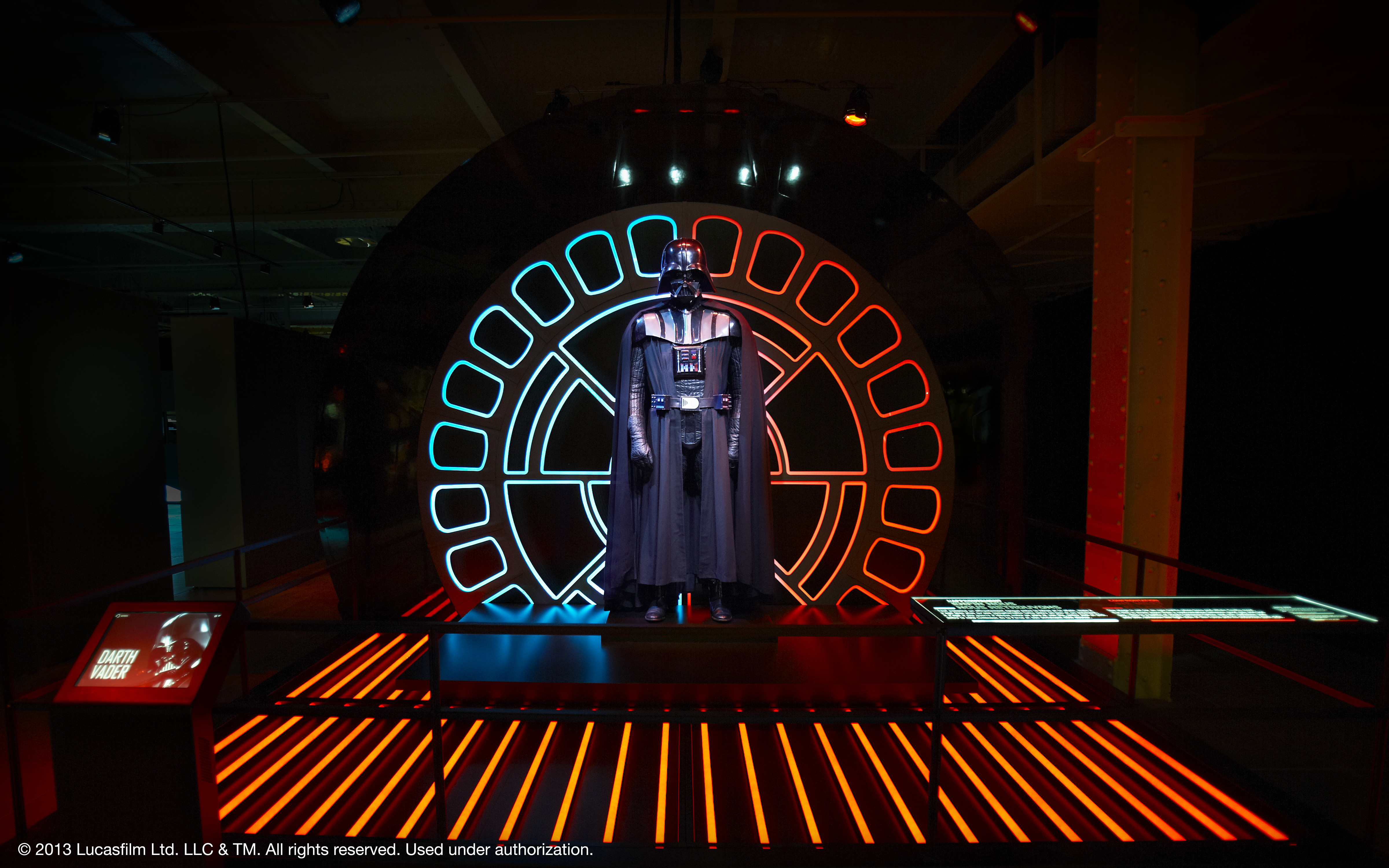 The adventure museum Odysseum in Cologne is showing the exhibition 'Star Wars Identities' until November 17, 2015.

For 35 years fans all over the world world followed the adventures of Luke and Anakin Skywalker – the two brave Jedi knights from a galaxy far, far away. With modern technology, the interactive show at the Odysseum Cologne gives visitors the option to get to know the 'Star Wars' characters in a completely new way. The people that brought 'Indiana Jones and the Adventure of Archaeology' to life teamed up with Lucasfilm Ltd. and X3 from Montreal to bring the fans an innovative exhibition about identity with the help of the impressive collection of the Lucasfilm archives. The visitors will get a better understanding of how the 'Star Wars' characters became what they are today and at the same time will check their own identity with a simple and fundamental question: “Which forces shape you?”

In 'Star Wars Identities' the visitor is at the centre of the exhibition and experience a personal and interactive identity adventure which runs through the whole exhibition. The exhibits and scientific background were perfectly combined with each other to enable a unique experience. Visitors of all ages can create their own personal Star Wars character by combining their own features with fictional elements. Afterwards the visitors have not only gained a better understanding of the core theme of the exhibition but also created their own character from the Star Wars universe, they can have sent home via eMail.

The exclusive collection with about 200 exhibits from the Lucasfilm archives features props, models, costumes and art from the movies, including a few dozen objects that have never been shown before. Pieces from the entire Star Wars universe can be seen. Fan favourites such as Darth Vader, R2-D2, Chewbacca, Boba Fett, Yoda, the Millenium Falcon and Anakin's life-size Podracer are shown here.

After appearing in Paris and Lyon the ODYSSEUM Cologne is the German station as part of the European tour of the exhibition. Since the highly successful premiere at the Montréal Science Centre in 2012 it has been visited by more than 1 million people.