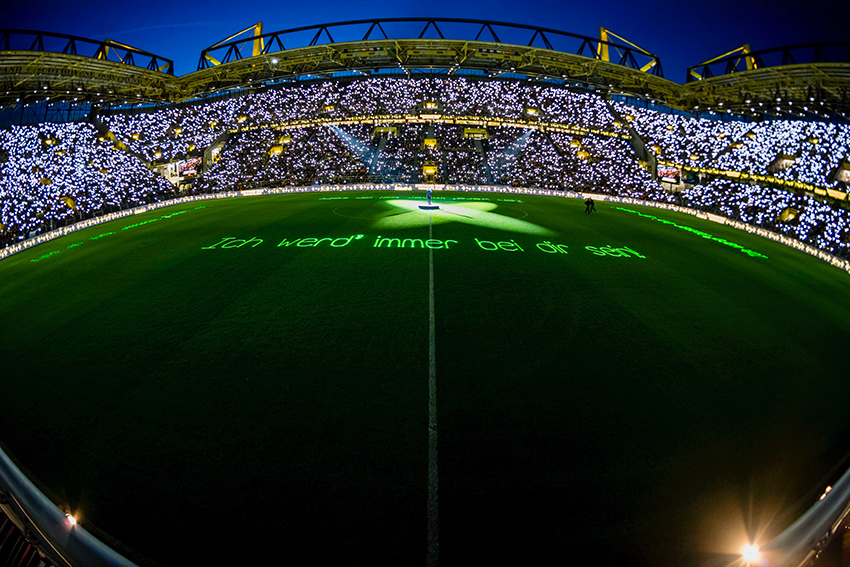 During the three MMP Concerts in Dortmund, Gelsenkirchen and Klagenfurt, football fans proved that they not only sing along loudly to fan chants – and thus set a world record.

What's more fitting during Christmastime than "Silent Night, Holy Night" or "Jingle Bells"? These Christmas classics, which are normally sung in small groups under the Christmas tree, were performed by almost 70,000 people in the Signal Iduna Park in Borussia Dortmund on the 3rd Advent Sunday – setting the record for the world's largest Christmas sing-along concert. The BVB fans sang a total of 20 German and English Christmas songs together with artists such as Joy Denalane, Joris, Bruce Kapusta and Daniel Danger. And also the BVB team didn't miss the opportunity to come on stage with all the artists towards the end of the event. Together they sang the football anthem "You'll never walk alone" and the song "Jingle Bells". Actor and passionate BVB fan Wotan Wilke Möhring, who read a witty BVB story to great applause, provided a short break for the fans. The concert took place for the third time in Dortmund. All proceeds will be used for social causes of the institutions "leuchte auf", "LensingMedia Hilfswerk" and "SOS Kinderdorf".

For the 4th time this year, the "Christmas Singing on Schalke" took place in Gelsenkirchen. Nico Santos and Volker Rosin as well as Lena Falkowski and Olaf Thon performed here as prominent supporters and sang together with 31,000 visitors. Furthermore, the first edition of "Kärnten singt Weihnachtslieder" was a complete success with 5000 visitors. Musicians like Nik P., Udo Wenders, Die Kaiser, "Heli" Brunner, Petra Mayer, Vanessa Dollinger and Die Stockhiatla performed the most beautiful German and international Christmas songs together with the audience. At the end of the almost two-hour long concert, the local team also had their big performance: Austria Klagenfurt provided the finale of an all-round successful first Advent Sunday afternoon with "Silent Night".

Further information about the Christmas sing-along concerts can be found on mmpevent.de.

The entire Christmas sing-along in Dortmund can be watched at WDR Mediathek until 22.12.19.