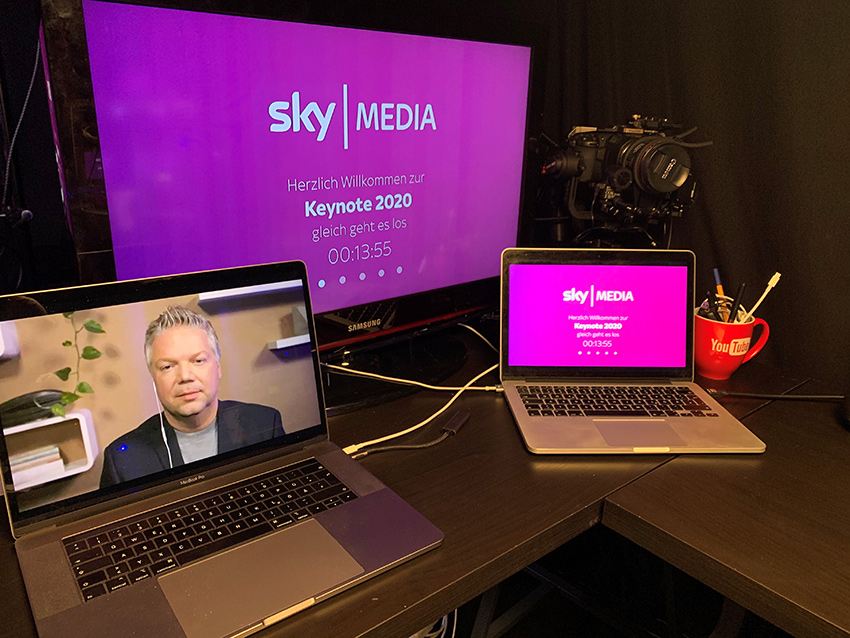 Even after a year of only staring at screens, SUPERAMA’s production provided a surprising presentation of Sky Media's marketing – and received entirely positive feedback from the viewers.

For almost a year, travel of any kind has been restricted and the personal contact that defines our industry has not been possible. After the Screenforce Days 2020 had to be cancelled, Sky Media, like all TV marketers, was looking for a way to present its marketing topics and focuses to its advertising customers in an emotional and surprising way as a digital wrap-up. Sky's task to SUPERAMA:
Development and production of an online streaming keynote with a maximum length of 10 minutes.

The Waiting Room at Michael Praetorius' studio during the playout of the broadcast signal.

The challenge: How to grab the attention of the viewers in front of the screens?

The digital keynote had strong competition, especially the daily routine of those who were potentially interested. After all, hardly anyone voluntarily watches a 10-minute lecture on the topic of "sales messages" if it is not sprinkled with personal contacts, acquaintances or friends from the industry. SUPERAMA managed to keep the viewers glued to their screens by creating surprising moments and an extraordinary visual dramaturgy combined with a personal touch.

Surprises in the video call – how is that possible?

What began as a normal Teams-call quickly turned into an experience: SUPERAMA played with the audience and, after the short video call, took them on a one-shot journey through set and light changes into the specially developed backstage studio scenario. Here, not just one, but seven sets awaited those who were interested. Based on the product portfolio of Sky Media, the agency designed thematically elaborate sets without losing sight of the haptic playability. Even the speaker change was used visually by the agency: By using a camera move through the floor and other effects, the changes were exciting to watch. To round everything off, the presenters – as non-experienced moderators – were staged authentically and professionally.

All the effort put into this keynote, which was thought through from start to finish, paid off: with 1450 views, the client's expectations were fully met. The feedback was also consistently positive. A good enough reason for Sky Media to continue the keynote series in 2021.

Curious?
Watch the whole keynote (in German) in the video below: