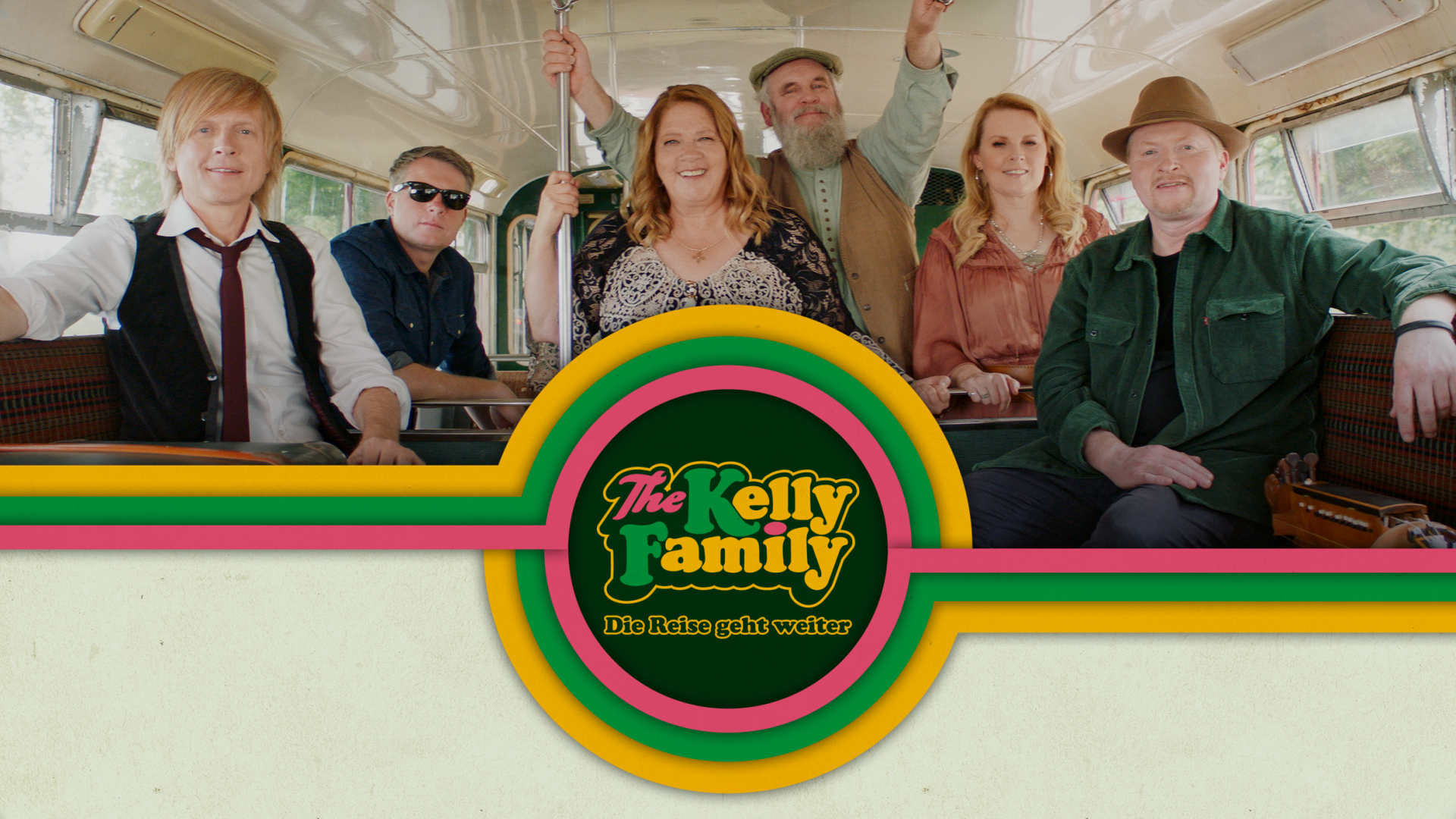 The probably most famous clan from music history of the 80s and 90s is back on tour: Since September 5, "The Kelly Family – The Journey Continues" has been running as a five-part documentary on RTLZWEI. The Munich agency ZWEI FREUNDE was responsible for the 360-degree campaign with a retro look.

Kathy, Patricia, Joey, Jimmy, John, Paul and Caroline – these names are familiar to probably everyone. In the five-part documentary, the Kelly Family is on the road again starting this week on RTLZWEI. True to style, with the restored original double-decker bus they used to tour with as children and teenagers, they travel through Europe and visit the places and people that shaped them as a family. "That's also what's special about the series: you notice very clearly that the Kelly siblings have always been a unit and, even though they have all moved on, they still have this very strong bond with each other," notes Sebastian Pforr, Head of Creation ZWEI FREUNDE. The design agency from Munich was responsible for the 360-degree campaign of the documentary series and developed it around the colourful Kelly Family logo and the family's retro double-decker bus.

In order to reach the Kelly Family fans and win new ones along the way, RTLZWEI decided on a holistic campaign. The on-air elements with several teasers and trailers started on 15 August at RTLZWEI. Print ads, online advertising and radio spots followed shortly afterwards. Since the young target group and therefore future Kelly Family fans were also to be addressed, RTLZWEI's online and social media channels were used extensively: On RTL2.de, YouTube, Facebook and Instagram you can see interviews, best-of clips and amusing family anecdotes of the Kelly’s.

"The legendary Kelly Family logo is the central visual element of our 360-degree campaign. We have re-staged this iconic brand, the family and their famous bus in all our advertising material. The result is a familiar but at the same time fresh setting," says Carlos Zamorano, Chief Marketing & Communications Officer at RTLZWEI, describing the campaign design as well as the challenge for the Munich agency ZWEI FREUNDE. The Kelly Family logo has a "rather wild colour scheme", which caused some headaches for the agency: "In the key visual, we were a little worried that the logo and the lettering on the bus would get in each other's way, so we planned with two versions, one with the Kelly Family in the bus and one in front of it," reveals Sebastian Pforr, Head of Creation at ZWEI FREUNDE. "However, these concerns quickly turned out to be unfounded and the version in front of the bus proved to be the narratively stronger motif." The prominent portrayal of the bus was quickly decided on as, Pforr continues, it takes on an important role and, especially in the first episode, acts as "a kind of catalyst for this, let's say, warm, family Kelly vibe".

When it came to the packaging for the programme, however, the deliberations went further, because even though everyone involved was quickly able to agree on the retro look to match the 70s bus and the logo typography, the colour scheme was a point of discussion: "The colours with dark green, orange and pink caused some discussion. In the end, however, even that turned out surprisingly well – or I just got used to it," jokes Pforr. "No, seriously, I think we were all surprised that it worked out so well!"

Only one day of shooting for promo, social, interviews and photos

Another challenge was the production itself, because there was only one possible shooting date. "With so many people involved, including management, label and the bus, it was not easy to juggle everything. Besides, there is simply a lot to do for a campaign of this size. In addition to the actual promo shoot, we had a second set for socials and interviews as well as photos," Sebastian Pforr reports and laughs: "I don't think anyone was bored on the shooting day."

Photos Behind the Scenes:

"This was our first collaboration of this size and I can really only say thank you because the collaboration was great and we really teamed up with RTLZWEI," summarises the Head of Creation ZWEI FREUNDE. "This was really great fun and is anything but a matter of course. Thank you, Irina and Stefanie!"

Further information on "The Kelly Family – The Journey Continues" (in German) at https://www.rtl2.de/sendungen/the-kelly-family-die-reise-geht-weiter